[This is a thing I wrote back in May. It's sad, and deeply personal, and not at all about computers. Content Warnings for 9/11, cancer, death, eating disorders, economic strife, and The Hitchhiker's Guide to the Galaxy.]

The rest of this is pretty heavy, so here’s a picture of me when I was 17, holding a home made beeblebear. 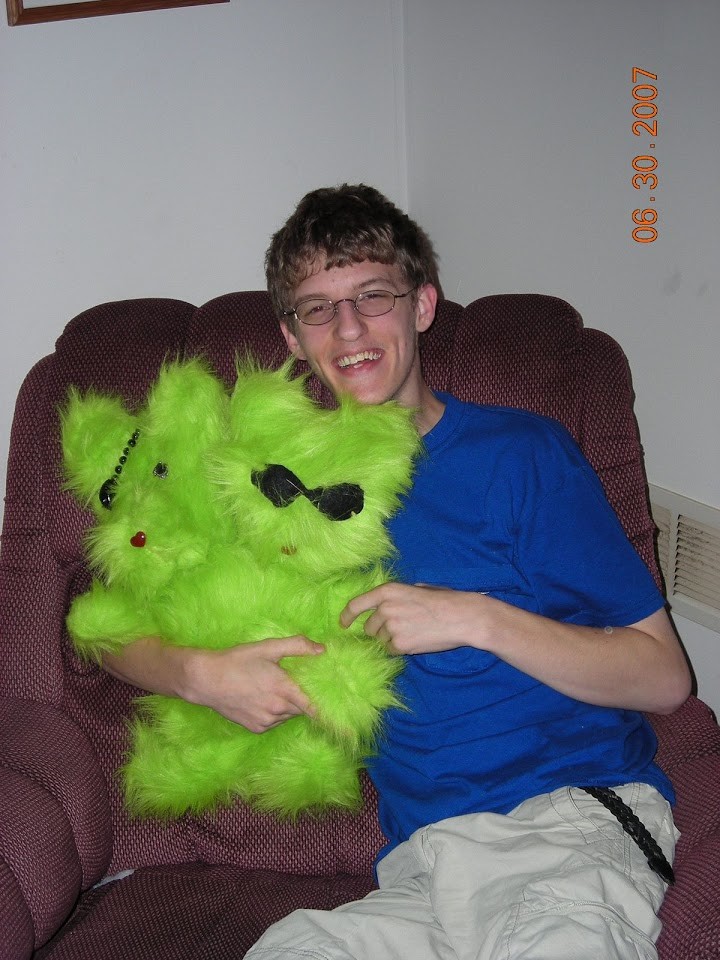 If I seem unreasonably skinny, it’s because I was. I weighed 120 lbs in this picture, and I was at least 5’11”. I was eating one meal a day, because a cocktail of depression and anxiety had left me with an eating disorder that I didn’t realize I had. This is the lighthearted part of the story.

As I’m writing this, it is Friday, May 24th, 2018. That means tomorrow is Towel Day, the ad-hoc holiday fans arranged back in 2001 to memorialize Douglas Adams, the author of The Hitchhiker’s Guide to the Galaxy. It’s not a date that was of particular significance to Adams, it just happened to be the earliest day fans were able to organize for a memorial. Organizing, of course, on newsgroups and mailing lists and message boards, and the other various (decentralized, federated, ad-hoc) platforms people used to self organize in the heady days of the early consumer internet.

The reasons for this are varied and obscure, but they start with the fact that Adams made a throwaway joke about “Knowing where your towel is” being intergalactic slang for having life figured out, having a plan, being prepared (because he so frequently misplaced his own, while spending time at a pool or beach.)

I make it a point to know where my towel is.

It’s a day that I approach, this year as every year, with mixed emotions. I missed Towel Day 2001. I was in the fifth grade, after all. I’d never read The Hitchhiker’s Guide to the Galaxy (and, as an American, I wasn’t fortunate enough to have seen the TV show or heard the radio plays, and as a millennial I wasn’t unfortunate enough to have stumbled blindly in to the Text Adventure Game (yet.))

I was unaware the man had lived, much less that he had died. My biggest concern at the time was probably convincing my teachers that our homebrew “Math Practice Card Game” was in no way an attempt to bypass the school’s ban on playing the Pokemon TCG. To put another way, I was a child.

The next school year, entering the 6th grade, entering Middle School, would have been hard enough on it’s own, but most of the kids I went to elementary school with were districted for another middle school. I was, more or less, alone, my parents were on the verge of divorcing, my paternal Grandfather had just been diagnosed with Alzheimer’s disease, and it was the fall of 2001.

If you’ll remember, the fall of 2001 was a pretty emotionally fraught time in the US, even if you weren’t a middle schooler who’s home was quickly disintegrating.

I remember, vividly, sitting in class, the TV suddenly turning on without any interaction from our teacher, and hearing the news of that day recounted. I remember walking the halls to my next class scared, confused about the future. I remember a class mate passing me, his yellow parachute pants akimbo as he jumped up and down excitedly shouting “They Bombed the Fucking Pentagon!” And I remember my English teacher, a man for whom I have endless respect, calling class for the day and walking us to the library.

While I was busy laughing my ass off at jokes I barely understood, and being scandalized by phrases like “The triple breasted whore of Eroticron 6” and book titles like “Where God Went Wrong” and “Some More of God’s Greatest Mistakes” I was not at all thinking about the fact that my parents weren’t talking to one another, or that my Grandfather no longer recognized me, or that people were flying airplanes in to buildings.

When I was done with it, I made sure that every person in that school that I had even a passing affinity for had also read it, and I made use of the wonders of our school’s internet connection to learn everything I could about Adams. I learned of his other books, and I bought them, and devoured them. I learned of his two (excellent, but incredibly difficult) text adventure games, and I beat them (eventually.) I read about The Digital Village, and the doomed Starship Titanic game (and I found a copy! and I played it! and I did not do well.) I listened to the radio show, I got the DVDs of the TV show. I made a 2 headed, three armed “beeblebear” which likely served as the cover image for the thing you’re now reading. I started listening to Pink Floyd. I fell down a technology rabbit hole from which I still haven’t emerged.

What I’m saying is that middle school was hard for me, and I got beat up a lot. If you didn’t get that, maybe re-read the above and remember that I was 11 years old, and my home life was falling apart. I got way too in to this stuff, and I got beat up.

And I learned of Adams’ death. I learned that he died a few months before I knew he existed. I learned that his life was celebrated by people all over the world, and that they organized through the (open, decentralized) internet, and I decided that The Internet was the best thing that could possibly exist.

For the next few years, I carried a small towel with me everywhere, and I displayed it proudly every towel day. But, as much as Towel Day was a celebration of his life, his fans, his work, it was also a reminder of his death, and of what is still probably the hardest point of my life. I approached each towel day with mixed emotions, deep, complicated emotions that I never wanted to take the time to examine.

My parents got divorced in 2004, which came as a relief. My grandfather got sicker, and eventually died. My mom really struggled with being single, and the stress of that bled over in to my life. My best friends moved away, ended up at other schools, stopped talking to me. I met new people, and some of them were very important people, but I was in a very bad place.

Eventually, my Mom and I had a pretty big fight. It was almost a physical altercation. I moved in with my dad the next day. I didn’t see her much for the next few months. Life was rough, but things never really got worse than they were in the fall of 2001. Nothing really tops “I’m 11, my own life is falling apart, and now so is the rest of the world”, you know?

And then I graduated high school. I designed my own graduation invitations, they said pretty clearly “I know where my Towel is.” That, of course, was a lie.

Our graduation ceremony was on May 23rd, two days before Towel Day, and the realization of this dawned on me as I was waiting to walk across the stage. I was graduating high school, I didn’t have a plan, most of my friends were gone, and the global economy was in a death spiral.

It was a weird cocktail of emotions. I was scared, of course, and excited, and suddenly wistful and sad and all manner of other things, and then I was rushed across a stage and in to a reception area and I stood by myself and let the weight of the day wash over me, watching people I didn’t know flit in and out of my eye line.

It was a heavy moment.

And in the middle of it, my mom walks up to me and hands me a shiny new omnibus edition of The Hitchhiker’s Guide to the Galaxy, and a bath towel. Inside was a letter about how proud she was of me, how happy she was to see me succeeding. I realized, in that moment, that I was scared.

I burst in to tears. Everyone else in the area was baffled, but I just stood there bawling my eyes out. After that, Mom and I started talking more often. We’d see each other a few times a month. We ate dinner together, she helped us figure out how to buy a house. A towel went a long way.

A few years later, a good friend and I met on towel day, at a waffle house, towels on our shoulders, to discuss what would become Analog Revolution, the Record Store that we ran for the next several years of our lives. (He also drank a chocolate pie through a straw. That one was real weird.)

And now, I’m sitting in a book store 650 miles from my family. It’s May 24th, tomorrow is towel day, it’s been 11 years since I graduated high school, the global economy is in a death spiral, and my mom is laying in a hospital bed, in her living room, in her Cabin in the Woods. She won’t live to see the end of June.

She bought the cabin because it’s what she wanted, it’s what she had dreamed of retiring to. She had been planning for it for years. She bought it almost 20 years before she was old enough to retire because too many of her friends and co-workers had spent their whole lives planning for a retirement they never got.

She bought it, and the day before she signed the papers she was diagnosed with stage three cancer. That was a little over a year ago.

We went to see my mom two weeks ago. We all cried a lot, and they put her in hospice care, and we all cried some more. I made sure she had her towel with her, for all the good it would do her.

Tomorrow is Towel Day, and my mom is going to die soon, and the world is going to hell, and I’m scared. I keep hoping that if I close my eyes, and let the weight of the world weigh on me for a minute, I’ll open them and she’ll be standing in front of me offering me the towel that I have so clearly misplaced.

But then I open them, and I’m alone in a bookstore cafe, crying in to a latte, banging out a weird, too personal essay on a computer built in 1993, and everything is just as bad as it has ever been.

Tomorrow is Towel Day and I am going to a wedding. The happy couple are new friends that I have known for about two years, and neither of them has read The Hitchhiker’s Guide to the Galaxy, so I am going to buy a nice shiny copy of the omnibus edition, wrap it in a fancy new bath towel, and make sure that I am there to present it to them when they have a still moment, and the weight of the world starts to creep in.

This towel day, and every towel day, hold those you love close. Make sure they know where their towel is, okay?