The War of the Stars: A New Hope Grindhouse Edition

Have you ever watched a movie and thought to yourself “Man, that would have been great except for the midiclorians?” or something similar? It turns out, you’re not alone. There’s a whole crew of folks all over the world who are taking commercially released films, and editing them for various reasons. 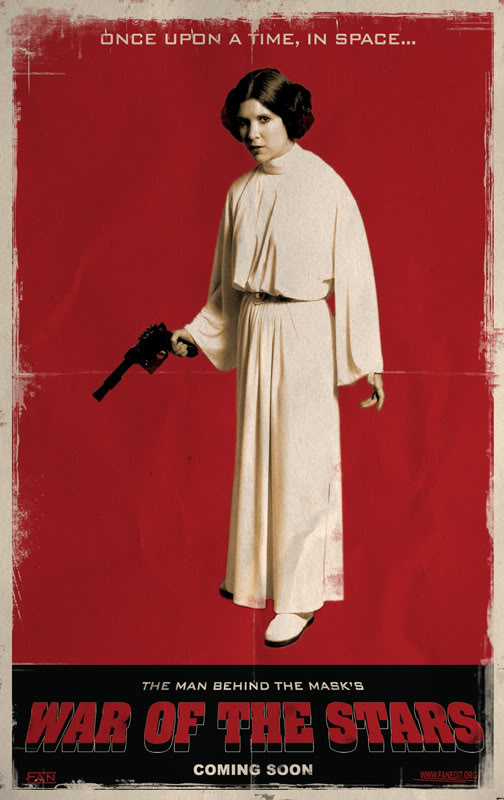 Sometimes they get chopped up in to entirely new films, Sometimes they get minor tweaks (a midiclorian here, a podcast race there.) The end results can range from entirely unique, transformative, and wonderful to kind of off-putting and not great.

I am a big fan of Cory Docotorow’s novel Pirate Cinema, which deals with a group of Londoners who live off grid and remix movies in to new movies. The book is a free download from his website. When I discovered that there was a group of folks doing this IRL, I had to dig in and learn more.

Today, we’re going to talk about one of my favorite fan-edits: The War of the Stars - A New Hope Grindhoused

The War of the Stars - A New Hope Grindhoused FULL FANEDIT from TMBTM on Vimeo.

Drawing on fan films, deleted scenes, and studio tricks The Man behind the Mask manages to turn A New Hope in to a new, and very different film. It’s bloody, it’s weird, and it’s everything you’d expect a cheap grindhouse imitation to be.

Frankly, it’s wonderful, and you should watch it as soon as your able.

After this film, TMBTM wasn’t done with his new, weirder War of the Stars universe. He released a sequel: The War of the Stars II: The Future In Motion. This sequel is even better than The War of the Stars, and makes even more dramatic changes to // Deviations from the source material (condensing 2 films in to one, giving Bobba Fett a larger role.) It’s not a Grindhouse cut. The visuals are clean and clear, and the editing is very well executed.

Even if you’re not a Star Wars super fan, it’s worth giving these films a chance as they present a very different vision of the Star Wars universe.