Silicon Teens by The Pulsars from the album Pulsars

Earlier today I wrote about a 1980 album “Music for Parties” by the fake band Silicon Teens. This reminded me of the 1997 album Pulsars by The Pulsars (another band that doesn’t really exist), and their song “Silicon Teens”. Have we gotten meta enough yet?

About The Pulsars, wikipedia says:

The Pulsars was a new wave/indie rock band from Chicago, Illinois led by Dave Trumfio and his brother, Harry Trumfio. They signed to Herb Alpert and Jerry Moss’s Almo Sounds label and recorded two albums in the mid-1990s, one of which was released and another that has yet to be released.

David Trumfio (born August 16, 1968, Chicago, Illinois, United States) is an American record producer, mixer, engineer and musician best known for his production work with artists such as Wilco and his recordings with his own band The Pulsars.

The track Silicon Teens is a clever little homage, and it captures the minimal synth spirit of Music For Parties, while managing to avoid the 80s smarm. 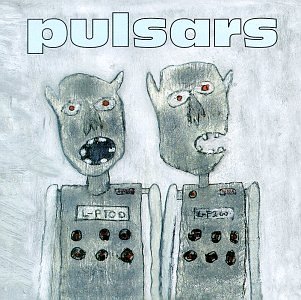 The album cover is, unfortunately, one of the ugliest things I’ve ever seen. Don’t let that stop you from enjoying a weird little slice of the 90s.

Listen to the full album here.