The name Space Patrol has been used by more than a few series over the years. Earlier, I wrote about Space Patrol Orion, which is an awesome show and worth paying attention to. But it isn’t my favorite show to carry the Space Patrol monkier. That honor belongs to the original Space Patrol from 1950. 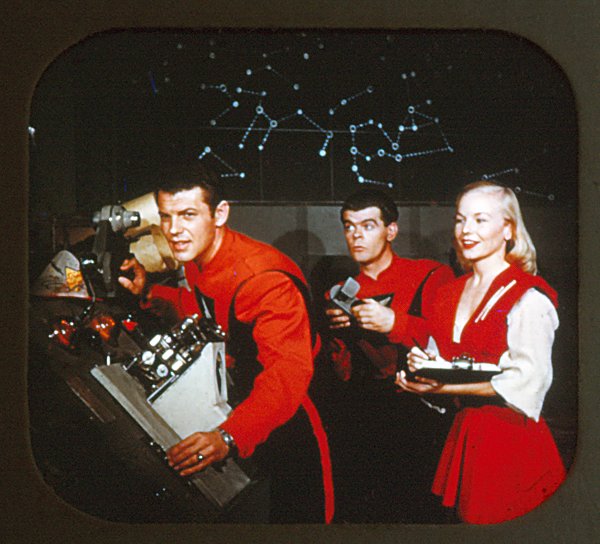 That’s right, 1950. It predates I Love Lucy. It predates pretty much every TV show you’ve ever heard of. There are a few reasons for this:

Space Patrol, like all TV in 1950, was a live broadcast. The show was transmitted in real time. They filmed 5-6 days a week. The same cast also did live radio broadcasts. Most estimates put the number of episodes broadcast at somewhere around 1000.

Of those thousand episodes, roughly 130 survive in a watchable state, as well as a large portion of the radio broadcasts.

Consider this: The episodes were broadcast live, daily. That means very little rehersal. That means Special Effects are done in camera. That means that if an actor flubs his line, or knocks over a piece of the set, they have to Keep Going. And, somehow, in spite of all of the potential for mishaps, Space Patrol was GREAT.

To say Space Patrol was a national phenomenon is understating things. There was a time in the 50s when nearly every child alive was aware of, and wante to join, the Space Patrol.

There was a comic book. There were tie in toys. There was a breakfast serial. There was a Life Sized spaceship given away as a prize in a raffle.

What I’m saying is that every facet of modern science fiction fandom owes it’s lifeblood to Space Patrol, and you owe it to yourself to watch an episode.