I’ve just finished reading Subject to Change: Guerrilla Television revisted by Deirdre Boyle, and I have some thoughts about it that I want to capture while they’re fresh. This isn’t a review, really, just a way for me to organize how I feel now that the book is over. 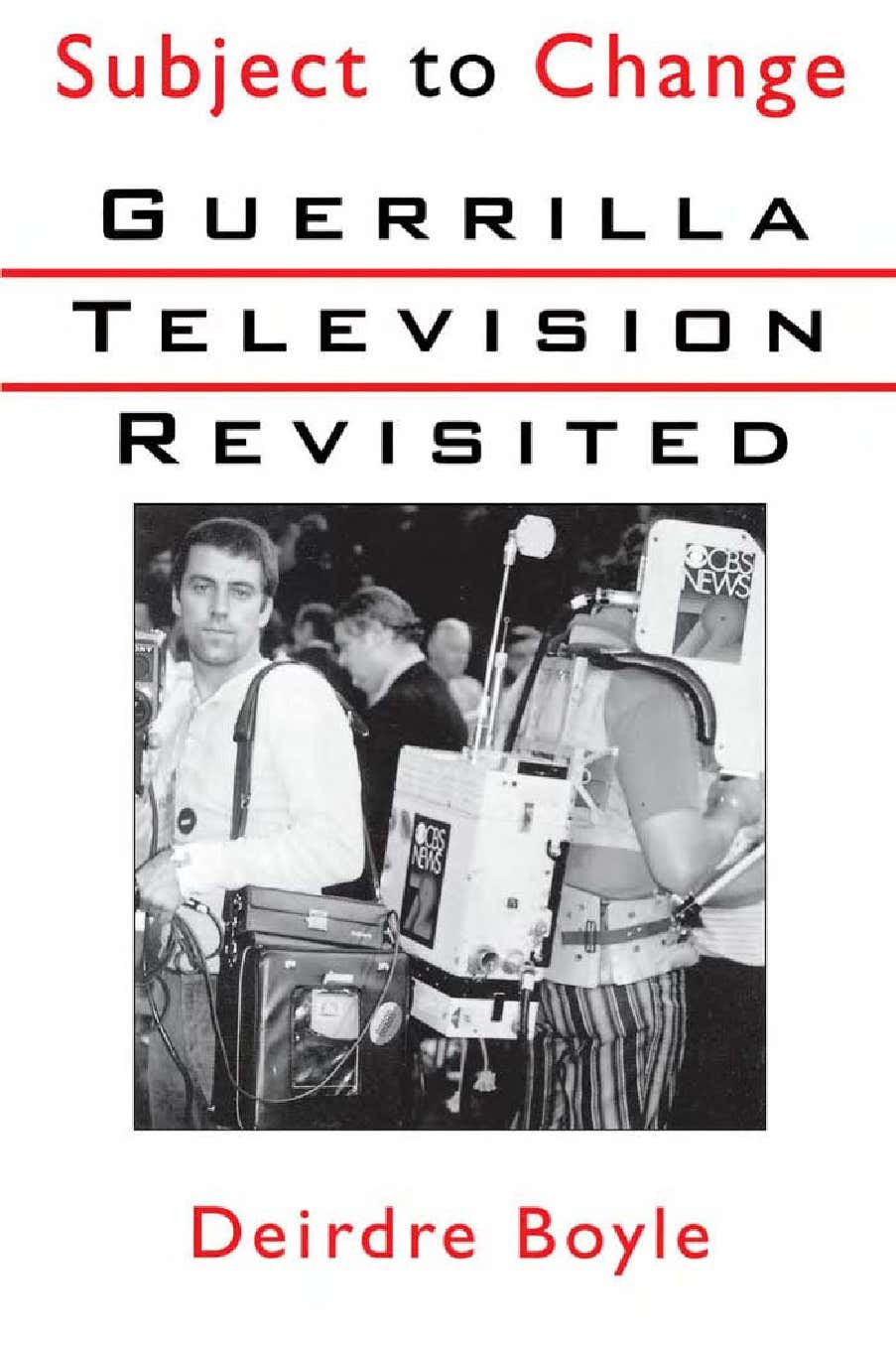 First, the title. “Subject to Change” was the name of the pilot that The Videofreex produced for CBS. (I wrote about the Videofreex earlier.) This is an odd title for this book, because the book is barely about The videofreex. A few of the freex merit a mention, and the story of Subject to Change is told, but the majority of the book focusses on three other video collectives.

The book chronicles the genesis of each of these groups, their triumphs, and their struggles.

More pages are devoted to TVTV than the others, because TVTV started sooner, lasted longer, were better at chronicling their work, and have been better archived. Many of the people associated with TVTV went on to be very successful in traditional TV and movies, as did several of the UCV crew. The book makes a compelling case that TVTV was doomed from pretty early on, and that UCV struggled to find a model that could be sustainable. Broadside TV fell apart pretty quickly, after what looked like a Very Promising start.

Ultimately, the biggest contributors to the failure of each of these video collectives came down to distribution and funding, and these twin issues fed on one another.

The only organization mentioned that seemed to have a clear vision, and a reasonable chance at success (Broadside TV) was, unfortunately, the one that failed first. This was more or less entirely the fault of the FCC under Nixon. Prior to the change in FCC rules, allowing cable TV operators to forego local content, Broadside TV might have had a viable long term model.

The problems of Funding and Distribution are, largely, solved problems today, but there was a third, more complicated problem: Organization. Every one of these efforts was eventually undone by struggles related to money or distribution, but before finances put the final nail in the coffin, each organization faced a crisis of purpose and identity.

The thing that made TVTV successful on a national scale was that they were willing to work collectively. They eschewed traditional hierarchy. This worked well until it didn’t, until scale and scope and ambition pushed them past their means and imposed hierarchy.

UCV and Broadside TV were also at their best when focussed on collaboration and centering their community, which became harder for each organization, in unique ways, as time progressed. TVTV failed when they chose to chase broadcasting, network TV money. UCV failed when they lost their focus on community video, and started focussing on winning awards. Broadside TV failed by letting Funding become more important than using the medium of video to tell stories.

A further problem that plagued all three organizations, the Videofreex, and every other alternative media movement since the dawn of time: Archival. (We are bad at archival) Many works from TVTV and the Freex survive, but few are easy to find, few are well known, and these two organizations are the exceptions. Much of the work done by UCV and Broadside TV was not, at the time the book was published, archived in any form or available to the public at all. (I’ll find out if this is still true in the coming weeks.)

Interestingly, the book was published in 1997. The web was in its infancy. The dotcom boom had barely started. The author throws a passing mention to “The information Superhighway” in the introduction, and does not mention the Internet again for the rest of the book.

This book is presented as the chronicle of a failure, of a movement that left no lasting impact other than What Might Have Been.

I imagine the author would feel differently in a post-youtube society.

Key takeaways (for the future)

The scramble for distribution and funding led to an ever escalating scale and scope for early DIY Video movements, and resulted in the installation of a top-down hierarchy, subsuming the bottoms up (each one, teach one) democratic structure that was common in the early days of video.

Technology has solved the problem of distribution, largely, and has lessened the problem of cost, but people are still people and capitalism is still rampant. That is to say, most people need money to live, and once money is involved, organization becomes more difficult.

Don’t do it alone, if you can avoid it. Modern technology means that a single person can effectively shoot, edit, mix, and distribute video. I know plenty of people who do that, and I’m sure you do too. It’s hard work. Working together is easier.

Be clear and explicit in your purpose, at least with yourself. Most of these early video collectives did not have clarity of pupose, and that became more obvious as time went on.

Key takeaways (for myself)

Narrowcasting (Long tail!) is good. Make content that is relevant to a small group or a specific person. If it’s valuable to others too, that’s gravy.

The podcast model, that is to say the subscription/download model, is superior to the streaming model.

The Creative Commons Organization has the right idea.

Stop worrying about Production Quality and make something.

I have a copy of Guerrilla TV (1971) on the way, and I plan on reading that with a critical eye. I’ll probably talk about that here when I’m done.

I also have plans to watch Here Come The VideoFreex. I imagine watching that after having read this will color my perception.

If these topics interest you, try: